Each year the Grand Canal Canter takes place twice, with a spring and an autumn event!

A flat Marathon, Half Marathon and 50k in Mid Devon. (50k only in March)

The routes are flat and 100% on the Grand Western Canal Path starting at Tiverton. 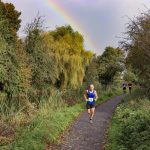 A flat 50k, Marathon or Half Marathon in Devon? Impossible you say!

The Grand Canal Canter routes heads along the picturesque Grand Western Canal, your choice of Marathon, Half Marathon or 50k! Will you take part in March or October or Both? (50k is only in March)

The route starts at Tiverton Canal Basin and heads along the canal paths for 6.6 miles to Sampford Peverell, here is the turn around point, where you head back to Tiverton and for the Half Marathon the finish line, for the Marathon runners you repeat the course a second time, 50k runners on their first lap will do an extra 5 mile loop at the start.

The Grand Canal Canter is a Cupless event, all runners must bring and carry either a water bottle, cup or running backpack with them. There are water containers to top up your water or fill your cup approx every 3 miles, but there are no cups provided.

MAKE SURE TO CLICK THE CORRECT BUTTON BELOW FOR THE RIGHT EVENT!

Upon signup you may be offered Refund Protect Insurance, this is an option added by Race Nation (the entry system proivder), it is nothing to do with Winding Paths Ltd, we do not receive any money or have anything to do with this insurance option.